Entropy and fluidity in Afghanistan 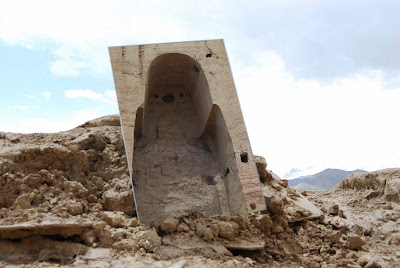 William Cobbing, Bamiyan Mirror, 2009
William Cobbing completed his PhD by Practice at Middlesex University in 2010. He is a Senior Lecturer in BA Fine Art: Sculpture at Wimbledon and is supervising a CCW PhD.
Starting from a sculptural sensibility, Cobbing’s art encompasses video, installation and performance. People are often depicted in fusion with their architectural surroundings, as extensions of the plumbing, or buried under layers of clay or concrete from which they absurdly struggle to extricate themselves. Human limbs appear trapped in buildings, suggesting a process of entropy through which their materiality is dispersed, the boundaries between the body and the landscape are blurred and meaning is disrupted. Cobbing will present Bamiyan Mirror, a recent series of photographs of the destroyed Buddha niches in Afghanistan, their ghostly shadows reflected in a mirror. The series will be exhibited in Scope: New Photographic Practices at Beijing University, November 2011.
http://www.artsandecology.org.uk/magazine/features/william-cobbing--bamiyan-mirror-series 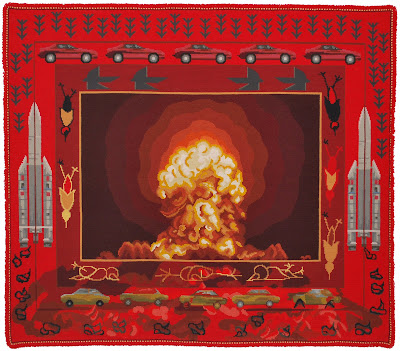 Carlos Noronha Feio The End (Birth and Fertility, Good News), 2008
Carlos Noronha Feio is in the first year of a full-time PhD by Practice at the RCA. His practice includes actions, performance, video, drawing, painting, photography and installation as research into cultural, local and global identity. He frequently adopts culturally significant images, locations and symbols as a form of creative interference with meaning, demonstrating the almost arbitrary nature in which cultural significance may be adopted or interpreted. Improvisation, repetition and conflicting juxtapositions are used to explore issues of communicating with otherness and the inherent fluidity of meaning. Noronha Feio will present A A and Away, a series of rugs he has been producing for the last five years that create bridges between Afghan war rugs and traditional rugs from Portugal. Illustrating perceptions of difference between the cultures of two politically and geographically disparate places, the rugs call attention to the two countries’ common past.
www.carlosnoronhafeio.co.uk
www.the-mews.org
Posted by The Practice Exchange at 07:06

About The Practice Exchange

The Practice Exchange (TPE)is a year long series of seminars exploring practice-led art and design research across UAL and beyond. It was set up in 2010 by Marsha Bradfield, Ana Laura Lopez de la Torre and Scott Schwager. Now in its second year, it is facilitated by Chelsea fine art researchers Maria Kheirkhah, Elizabeth Manchester and Charlotte Webb. TPE provides a platform where practitioners can present their practice to their peers and receive feedback in an open and engaged environment. Developing a community of practice that cultivates dialogue across practices, disciplines, research centres and academic institutions, it is marked by criticality, diversity and a DIY ethic.

TPE aims to increase the place of art, culture and research in the public domain and to raise UAL’s research profile.